Skip to end of banner Go to start of banner

Do you want to know more?

The ACME service is used to automate the process of issuing X.509 (PKIX) certificates using the ACME protocol, as defined in RFC 8555.

The ACME protocol is supported by many standard clients available in most operating systems for automated issuing, renewal and revocation of certificates. For example, the certbot ACME client can be used to automate handling of TLS web server certificates for common HTTP servers, such as Apache and Nginx. For more information, see ACME Client Implementations.

Many critical services and servers are already equipped with certificates proving their identity in a secure way, but lack the automation for example to renew certificates when the existing ones are expiring. Critical services often stop due to the fact that their certificate expire and manual processes are involved. The automation that comes with ACME enables universal encryption on the Internet.

ACME is also readily available in many server applications and devices that need X.509 certificates, making it easier to automatically provision certificates. Many devices, such as servers, printers and NAS (Network-attached storage) devices, also come with support for ACME.

Here are some common drivers for deploying ACME in a production environment:

Nexus' ACME solution is based on Protocol Gateway: 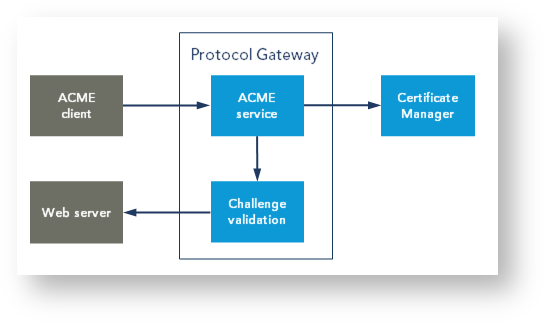 The ACME process is made up of the following major steps: