V2X communication includes road safety applications, for example by warning the driver about collisions, lane change and speed limits, better road utilization and saved fuel costs by platooning, as well as emerging autonomous driving use cases. These use cases involves the passing of information between vehicles as well as between vehicles and other entities, such as road infrastructure, road safety applications or pedestrian devices.

Why secure V2X with PKI?

Security is an essential part of the V2X ecosystem in order to function safely and securely. Potential threats include privacy breach by monitoring of individuals and personal data and cyberterrorism by faking or hiding vehicles or traffic signals, which can lead to traffic jam or accidents. To avoid those threats, authenticity of the communicated data as well as privacy of the driver, must be ensured.

Public key infrastructure (PKI) is the perfect fit for securing V2X communication. Based on trusted identities and digital signatures, the integrity of each message and the authorization of its sender can be guaranteed while preserving privacy. PKI is prescribed by the V2X standards, such as IEEE, 5GAA, and ETSI, and independent of communication technology, that is, C-V2X or DSRC.

With PKI, authenticity is ensured by digitally signing every message. Privacy is upheld by the specific V2X setup of two different CAs and short-lived, so called pseudonym certificates that are frequently changed, which means that no unique information about the vehicle or driver is sent over the network. 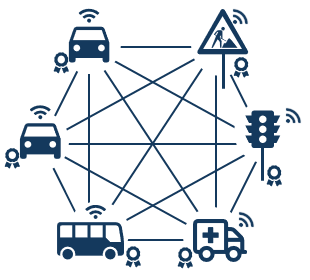 How does it work?

V2X messages carry data that enables the receiving devices to display relevant information to their users or even take intelligent decisions by themselves.

To ensure authenticity and privacy, the following procedure is used:

Nexus' V2X PKI solution is based on Smart ID Certificate Manager, which has the following features:

The solution fulfills automotive requirements by compliance with US and European standards, such as the following:

Do you want to know more?